A representation of a highly stylised female figure, given tremendous verticality, stirred by the wind which lashes against her body. The girl”s long tresses are moved fancifully by the wind and lend considerable movement to the work. The sculpture, which is the creation of Gerona-born Joan Abras, specifically recreates the female figure, always synthesising forms, yet without abandoning references to reality. This artist is closely related to the Mediterranean ambiance and tradition, in his works, in his interpretations and in his dreams. It should also be mentioned that this artist has opened a museum to the public in the town of Bisbal, Gerona, where he exhibits his sculptures, paintings, pottery and design. 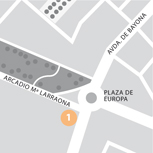