In its current configuration, the monument to St Francis of Assisi rises vertically from a two-step base supporting a cubeshaped pedestal and a robust, circular column. An inscription on the column base indicates the date on which the monument was remodelled: «Navarre to St Francis of Assisi, 1993». Navarre-born Ramón Arcaya is an artist who, throughout his years of artistic training, has assimilated many different influences, from Italian renaissance sculpture and also from 19th century, early 20th century French artists. The result is a work of art expressed through classical realism with occasional hints of expressivism. Arcaya has collaborated on many occasions with the Pamplona-born architect Víctor Eusa. In 1926, three Franciscan monks requested that, in the square of St Francisco, «on the spot on which the statue of the goddess Ceres is located, opposite the Municipal Schools, permission be granted to erect a monument to St Francis of Assisi, in remembrance of the peace he brought to Pamplona». The site was then occupied by a statue in honour of Charity or Abundance, popularly known as «Mari-Blanca». 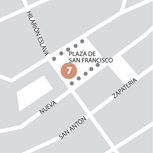