Cutting life off (Death and helplessness) This group of sculptures comprises two cast bronze interrelated figures. The largest one depicts a man who has just been shot in the neck, collapsing backwards. The smallest one is a young child, witness to the assassination and son of the victim. The ensemble is raised high on a sandstone pedestal, which plays a symbolic and aesthetic role. Although the best known facet of Juan José Aquerreta, National Plastic Arts Award winner 2001 and Príncipe de Viana Culture award winner 2003, is painting, he has also been a sculptor since his youth. Over the last few years he has placed more emphasis on this discipline, focussing on public, commemorative sculpture. One of his projects was dedicated to the annual Pilgrimage to the castle of Javier in Navarre, whilst this presentwork was created after having won the competition convened by the Tomás Caballero Foundation for a sculpture in remembrance of the Victims of Terrorism in Pamplona. Whilst his paintings are characterised by a synthetic, figurative style, almost abstract in its extreme refinement, his sculptures assimilate influences from a number of artists such as Degas, Brancusi, Giacometti, Matisse, and Moore. 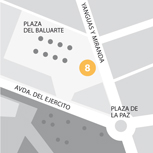