The sculpture comprises a raised cube-shaped, carved stone pedestal, on which a monumental bronze bust is mounted. The sculptor, Josep Blasco i Canet, successfully uses the impressionisttechnique to provide a highly accurate portrayal of the physical characteristics of Santiago Ramón y Cajal. Josep was initially focussed on paintings, with a preference for still life, landscape and portrait genres, influenced by Sorolla and Van Gogh. At the end of the nineteen sixties, he discovered the significance of the Genovese critical realist approach, which he used to present man as a massified, isolated being. From that realism he then moved on to materic and action painting and finally to a formless style. At the end of the seventies, his interest for contact with materials led him into sculpture work, adopting a simplified modelling process reminiscent of the evolution of Brancusi and Rodin, in other words, works with stylised curves and a marked geometry, in polyester tinted with graphite and also wood, clay or bronze. In the nineties, he went back to painting, either to project his three dimensional interests or to move towards hyper-realism with car breakers yards as the theme. In 1994, on the occasion of the III Ramón y Cajal Conferences, organised jointly by the Medical Association and the Navarre Cultural Organisation, this monument was erected. 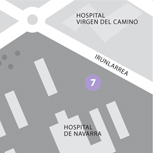