This work is a free-standing full-bodied bronze statue of Pablo Sarasate. This famous violinist from Pamplona is portrayed in his middle age, coinciding with the zenith of his career, with his characteristic moustache and hair almost covering his eyebrows. In his left hand he is holding his violin, whilst his right hand is used to rest his bow on the ground. The statue is part of an architectural stone structure comprising three columns and a compact block; two allegorical figures in high relief are shown on the reverse side. Granada born Eduardo Carretero, the author of the monument, is an artist who is conversant with all the skills of his trade, and is also involved in architecture and painting. His artwork uses all types of techniques and materials, based on a traditional, figurative style. On the 5th July 1950, during the unveiling ceremony of the monument to Julián Gayarre in the gardens of the Taconera, the mayor of Pamplona, Miguel Gortari, announced that the monument erected in honour of Pablo Sarasate in 1918 was to be replaced. Consequently, in 1952, the Navarre sculptor, Áureo Rebolé, conceived a project which was more than eleven metres high. Although this idea did not progress, a Pro-Monument Commission was created, chaired by José Moreno Luzuriaga and with Félix Huarte as honorary president. This commission was responsible for collecting funds by popular subscription, with a generous contribution made by the City Council. The author of the project was Cándido Ayestarán, whilst Huarte and Cía was the company responsible for the project execution. The bronze statue of the Pamplona violinist and the allegorical reliefs on the reverse side of the monument are the work of the Granada-born sculptor Eduardo Carretero, who had close connections with Pamplona at that time, through the figure of Félix Huarte. 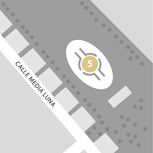