The monument, raised on a three-step pedestal, comprises a sober, geometric style architectural structure, designed by the Basque architect Pedro Muguruza, to which an ensemble of three sculptures has been added, the work of Seville-born sculptor Lorenzo Coullaut Valera. On either side there are the figures of García Jiménez, the lord of Abárzuza and the Améscoas, and his spouse Amaya, daughter of the Goth Ranimirio, the protagonists of Amaya or the Basques of the 8th century, the most popular historical novel by Navarro Villoslada. The work of Lorenzo Coullaut Valera remains within figurative realism although he endeavours to give it a greater conceptual and aesthetic content, firstly with hints of Art Nouveau and later, in his maturity, freeing his work from pictorial bonds to make it more sober and sincere, coming closer to the lines followed by Castilian realism and Mediterranean classicism. In 1918, coinciding with the First Centenary of the birth of Francisco Navarro Villoslada (Viana [Navarre] 1918-1895), the Regional Government of Navarre and the Pamplona City Council decided to honour the memory of this Navarre-born writer, journalist and historian, by erecting a monument in his honour. A public subscription was opened to help pay for the monument and, in turn, an open call for projects was convened. On 26th September 1918, as part of the events to payhomage to the writer, the monument was inaugurated with speeches by Fernando Romero, member of the Committee organising the homage, the mayor of Pamplona Javier Arraiza, and bishop José López Mendoza. 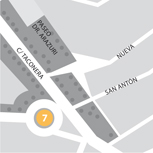