Fructuoso Orduna has used bronze relief sculpture on a number of occasions as the key element in his commemorative sculptures. This is clearly demonstrated in his relief in homage to the Navarre tenor Julián Gayarre, created in 1924, and in his monument dedicated to the senator José María Méndez Vigo, unveiled in Tudela in 1929. With regard to the homage to Juan Huarte de San Juan,this sculptor from the Roncal valley in Navarre had no image which would allow him to capture Juan Huarte”s physical features. Despite this, he was able to compose a credible portrait which reflected the qualities of goodness, modesty, serenity, reflection and knowledge, which Gregorio Marañón had attributed to this Navarre-born physician and writer in a conference given at the Navarre Cultural Centre in that same year of 1933, and based on reading Huarte”s book on Examen de ingenios para las ciencias (a trial of wits). On Sunday, 15th October 1933, in honour of the memory of this distinguished Navarre physician, a series of events were organised in Pamplona by the Navarre Regional Ministry for Culture in collaboration with the Navarre Cultural Centre, and which were attended by high-level uthorities from Pamplona, Navarre and St Jean de Pied de Port, his native village. These events included the unveiling ceremony for the commemorative monument created by Fructuoso Orduna which took place in the Gardens of the Taconera park, with a speech made by the scholar José Zalba; a conference given by Doctor Gregorio Marañón at the Navarre Cultural Centre and entitled «Notes on Huarte»; the inauguration at the Navarre Government Palace of the «Historical Exhibition of Bibliographies and Documents of the Period of Doctor Huarte»; and a banquet offered to the authorities and guests at the Hotel La Perla. 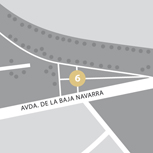