Monument to the Virgin Mary This is a sculpture of the Virgin Mary, showing her in prayer, dressed in a tunic and a mantle with a full spread and dynamic folds. Her bare feet rest on the sphere of the world and the crescent moon, symbols of the Virgin Mary, accompanied by little angels and cherubims. This work of art shows how the trend tocreate monuments to the Virgin Mary in the form of a columnstill continued in the 20th century; its configuration closely following a 17th century sculpture erected in Granada by Alonsode Mena. The creator of this present work is Oviedo-born Manuel Álvarez-Laviada, a figurative artist who trained in thenineteen-twenties in the Spanish Academy in Rome, where hecame him into contact with classical Renaissance sculpture. The solemn unveiling of the monument took place on 8th September 1954, within the framework of the Holy Marian Year, commemorating the Centenary of the dogma of the Immaculate Conception of the Virgin Mary and coinciding with the date of the Privilege of the Union. The traditional Group of Giants and Big heads preceded the procession which startedout from the Cathedral, headed by the Chapter”s Cross, and including the members of the City Council with its retinue of Macebearers, kettle drum players and band of music. Other Marian images progressively joined the procession as it made its way through the streets of Pamplona. 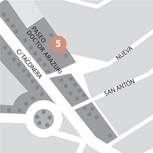