Encounter, as this sculptural work is entitled, no doubt refers to the relationship established between the two forms or figures making up the work. Both appear to be engaged in a dialogue between each other and are separated by a space, the intermediate void, an element which is also characteristic of the work of Manuel Clemente Ochoa. The work has been created in bronze, one of the preferred materials of this author, an artist who has been focussing on and specialising in public sculpture for many years now. His sculptural works follow a schematization process, using forms which are progressively taken from figuration to abstraction. The features, forms and volumes of these works are evocative of emotions, attitudes, etc. The work of this Cascante-born artist was initially based on the style of Henry Moore and Brancusi, from there, he has gone on to shape his own personal style, characterised by his progression to abstraction and geometrism, with a characteristic stylizationof forms and silhouettes. Forms which have been given dynamism and volume, through the use of shiny materials which produce surface reflections to create a play between volume and mass. A constant factor in Clemente Ochoa”s work is the verticality of his figures which are generally represented in pairs, so that a dialogue is established between them. 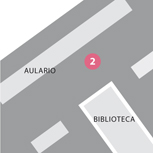