The world of bulls (Homage to bulls) This monumental ensemble comprises a concrete base supporting an obelisk or truncated pyramid which incorporates some rectangular-shaped wooden plaques on each of its four faces, in reference to the protective fencing erected along the bull running route during the San Fermin festivals. Crowning the monument is a huge sphere with four protruding bull”s heads, each facing one of the four cardinal points, in reference to the world of bulls. To execute this work of art, this sculptor from Estella, Navarre, used a mixed technique which included steel, glass fibre, oak, chestnut and cherry wood, selected as being typical woods of Navarre, for the symbols to be transmitted. The sculpture entitled The world of bulls was expressly created by Carlos Ciriza to participate in the «Forms» exhibition, organised by the City Council of Pamplona. During this event, held from July to October 1996, thirty-nine contemporary artists from Navarre exhibited sculptures in the Citadel gardens and Paseo de Sarasate arade, and this was one of the few works at the exhibition that was not damaged or vandalised in any way. The Pamplona Council showed an interest in acquiring the sculpture, and it was finally purchased in December 1998. 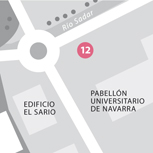 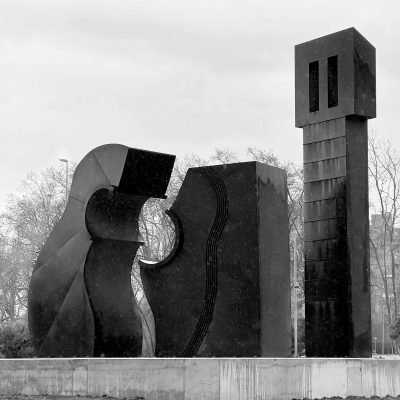 Monument to the Centenary of the Capuchin Province in Navarre, Cantabria and Aragon