A Latin cross featuring a number of different alternating rhythms in the design: lengthening and shortening of the ends, material and hollows in the form, lightening of the horizontal lines compared to the ascending verticality of the longitudinal axis, and the electric backlight which enhances the symbol with a delicate mysticism. In the execution of this cross, the artist has tried to combine tradition with modernity, in his endeavour to identify the Christian nature of this building, which otherwise shows little trace of being a place of religious worship. He gives this work of art a certain air of renewal, withan artistic style which is reminiscent of the cold geometric movements of the suprematism of the Russian, Malevitch, and architectural rationalism in general. In the multi-faceted work of Alfred Díaz de Cerio, who is a painter, sculptor, potter and also a poet, the sign of the cross is one of the icons that has most attracted him and which he has treated with a number of techniques and styles. In his painting this is the expressionist concept he most uses to fix a gesture or a twisting of the body through the pain caused by torture, and on other occasions to give poetic overtones. 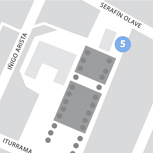