This present sculpture by Néstor Basterretxea is a work of tremendous verticality, ascending upwards, created with simplified, basic forms reminiscent of a totem by ancient civilizations or an enigmatic face. The upper part of the figure appears to be a face, evidently within the world of abstract aesthetics, standing majestically and solemnly on a concrete pedestal. As an artist, Basterretxea has always shown a keen interest in research work, constantly seeking to develop an avant-garde language, guided by his desire to investigate and experiment with the plastic arts. He is a leading exponent on themes based on the myths and legends of his people, on its prehistoric roots. One example of this are his well-known «Stelae», inspired by the ancient disc-shaped funerary stelae in the area. He has had the ability to take the symbols originating from Basque Culture, and to reinterpret its legends and myths within a profoundly contemporary style of art. The work installed at the Citadel appears to follow along these same lines and refers to the legendary old witches who lived in the mountains in times past. From the seventies onwards, Basterretxea”s sculptural creations evolved towards abstract expressionism, filling his sculptures with references to the mythology and popular beliefs of the cultural heritage of the Basque people, as evidenced in the Basque Cosmogony series. This present sculpture was part of an exhibition of works by Néstor Basterretxea at the Arms Room at the Citadel, within the Congress on Witchcraft and Para-psychological Sciences held in Pamplona, in November 1986. At the said congress, in addition to debates, talks and other acts, exhibitions were held with the famous etchings by Goya, and on Painters of Pamplona and Witchcraft, displaying works by Mariano Sinués, Antonio Eslava, Bartolozzi and Pedro Lozano de Sotés. The sculpture entitled Witch, by Basterretxea was subsequently acquired by the Pamplona City Council for five million pesetas. 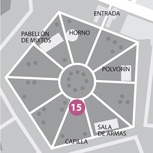