All the features of Russian constructivism are contained in this work by Aizkorbe. Its winged spatial dimension, its engineered appearance and its open, levitating structure, form the basis of an on-going aesthetic discussion, in which all the 20th century avant-garde artists have been involved, including Jorge Oteiza. The articulation of the forms, breaks into and penetrates the air. The secret of its beauty lies in the sobriety of its lines, a sobriety which is enhanced by the elegance of the design and the quality of the corten steel employed. From a northern periphery, Aizkorbe has shown an interest in the minimalist approaches, and also in the great Italian and Basque masters. The clean lines and voluptuous forms, characteristic of his sculptures, are the result of his experience at the Carrara quarries Italy) where he acquired a knowledge of classical statues and work with marble. Aizkorbe”s sculptural work was initially focussed on an Oteizastyle metaphysical approach, and from there, during the eighties, his work progressed towards a Chillida-style metaphorical concept, which is more gestural and Baroque, (his floating Articulations). In the nineties he returned to the more rigid discipline of geometry and the standard units which guide his experimentation (column, torso, stela, cube…) are broken down, articulated or expanded into space. In this present decade, his sculpture is becoming more compact, with rounded surfaces and curvilinear silhouettes, whilst his work still reflects the powerful influence of East Asia, following his participation in Art Expo 91 in Tokio. 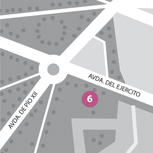